Realignment after the political and economic change

Summer 2021. The world is currently going through the second year of the COVID pandemic, and Germany is no exception. IDT Biologika has gained public awareness for its contribution towards combating the global pandemic. Leading German media sources have reported on the “Hope for COVID from the East” (FAZ), “Hidden Champion from Saxony-Anhalt” (Business Insider) and the “Global Player from Saxony-Anhalt” (tagesschau.de).

The company has suddenly appeared on the radar of federal politicians, journalists, and the public for good reason, as the specialist in advanced vector vaccines has the knowhow, technology and capacity to manufacture and fill COVID-19 vaccines on a large scale. It only used to be pharmaceutical insiders that were aware of the company located on the outskirts of Dessau, a company that has now gained so much interest from representatives from federal ministries and the international press.

Struggling for survival in the post-reunification period

This level of acclaim has come after an astonishing success story. The company’s predecessor was founded a century ago in Dessau’s downtown with just three employees; its survival after German reunification was anything but certain.

The Dessau-Tornau vaccine plant, originally the Bakteriologisches Institut der Anhaltischen Kreise, had been developing and manufacturing vaccines and drugs for humans and animals for decades and was without doubt one of the then German Democratic Republic’s more stable operations. The role the company played in supplying a large share of vaccines for the huge livestock numbers in the east of Germany secured substantial investment.

Even so, the political transition came with new market conditions such as new approval procedures for existing products, posing major challenges to the company. The managing director at the time, Dr. Heinz Hofmann, was largely responsible for ensuring the company’s survival as a going concern on the bumpy road ahead under the aegis of the Treuhandanstalt, Germany’s Public Trust Agency.

Success in the market economy

Among other things, Hofmann showed formidable political instinct in appointing several prestigious figures from West Germany to the supervisory board such as Dr. Ernst Biekert, former chair of the board of directors at Knoll AG, Ludwigshafen and member of the Science Council of West Germany; Gerd Schmitz-Morkramer, proprietor of Bankhaus Grunelius KG Privatbankiers Frankfurt/Main; Prof. Dr. Armin Rojahn, former head of Vetinary Services in the then West German Ministry of Food, Agriculture and Forestry; Mannheim lawyer Prof. Heinz Rowedder to chair the supervisory board; and company employees Horst Kaßner and Jens Bernert as elected representatives. Hofmann finally succeeded in selling the company – which the Treuhandanstalt had originally classed as not capable of restructuring – to the Klocke Group, thus establishing the company’s successful development up to the present day.

The new parent company placed its trust in the workforce under the leadership of Drs. Heinz Hofmann and Baldur Werner as directors, Dr. Andreas Neubert as the production manager and Dr. Gert Barysch as Sales/Marketing head from the start. The company’s development proved them right – the team successfully led the company into a western market economy.

It took DM 25M in investment and assurances that 230 jobs would be safe at the Dessau-Tornau vaccine facility for Hartmut Klocke to seal the deal with the Treuhandanstalt. These two commitments have not only been kept but exceeded many times over since then. IDT Biologika currently employs around 1,600 people across the world with investment in new vaccine production and filling alone amounting to more than € 100M. 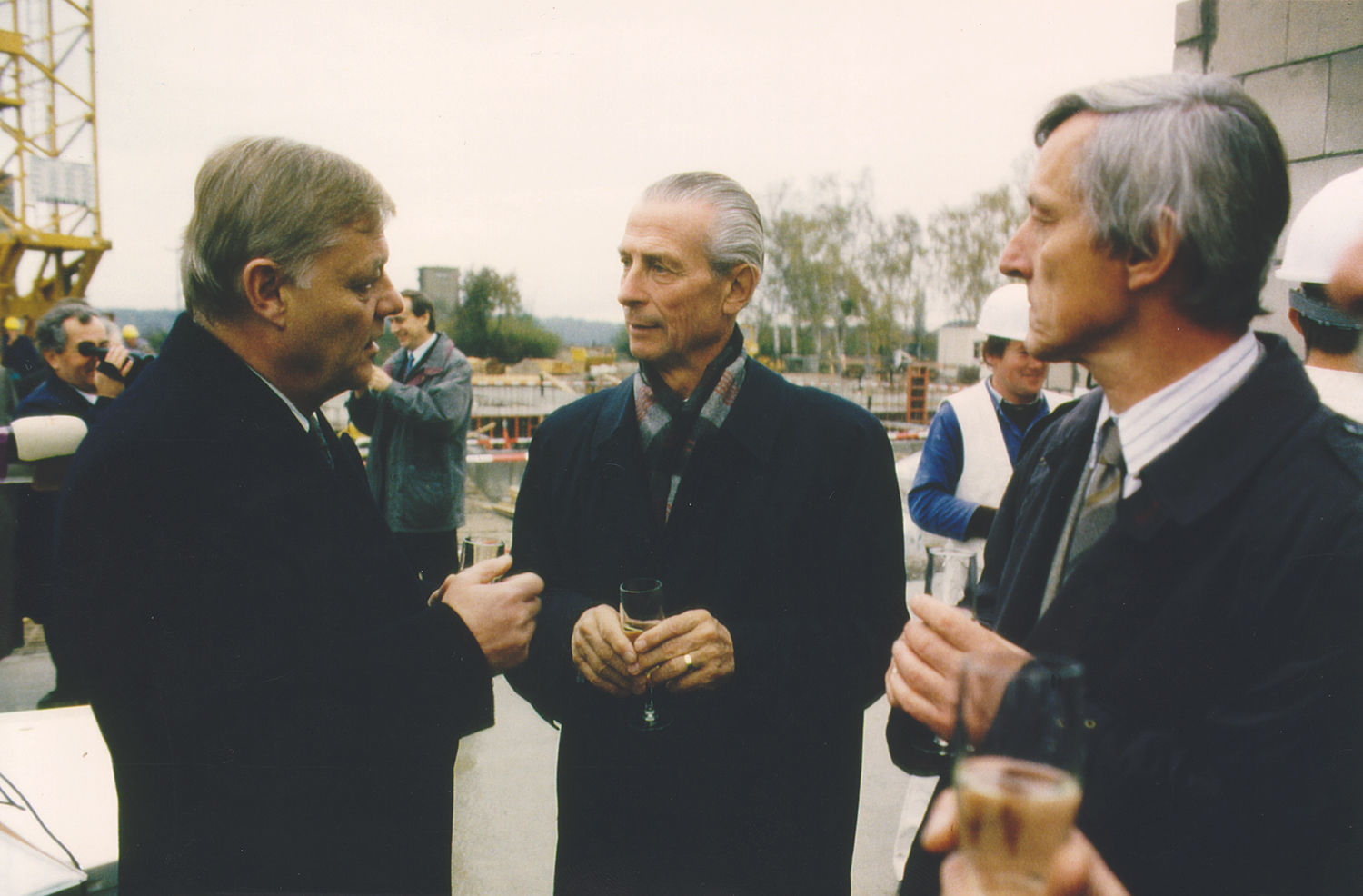 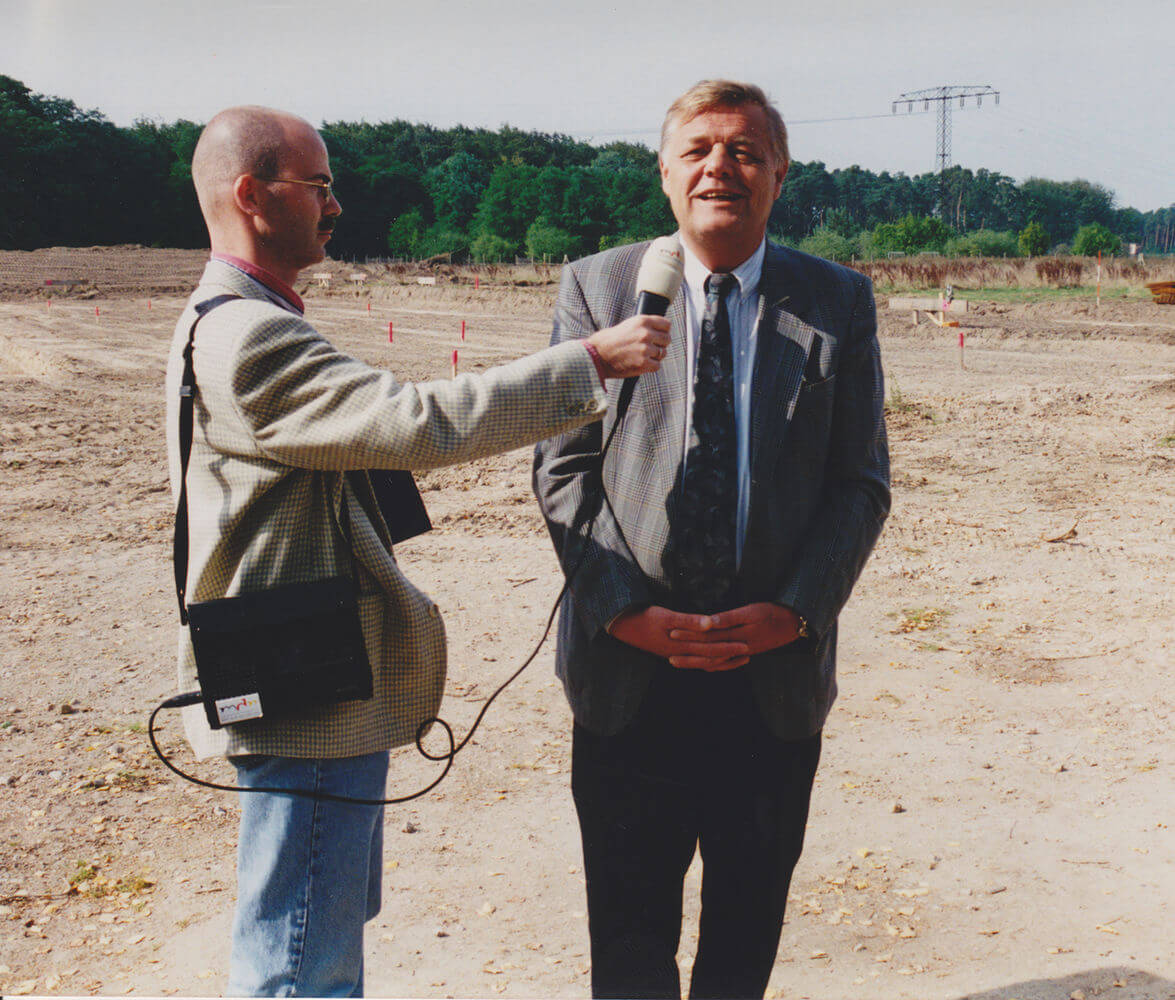 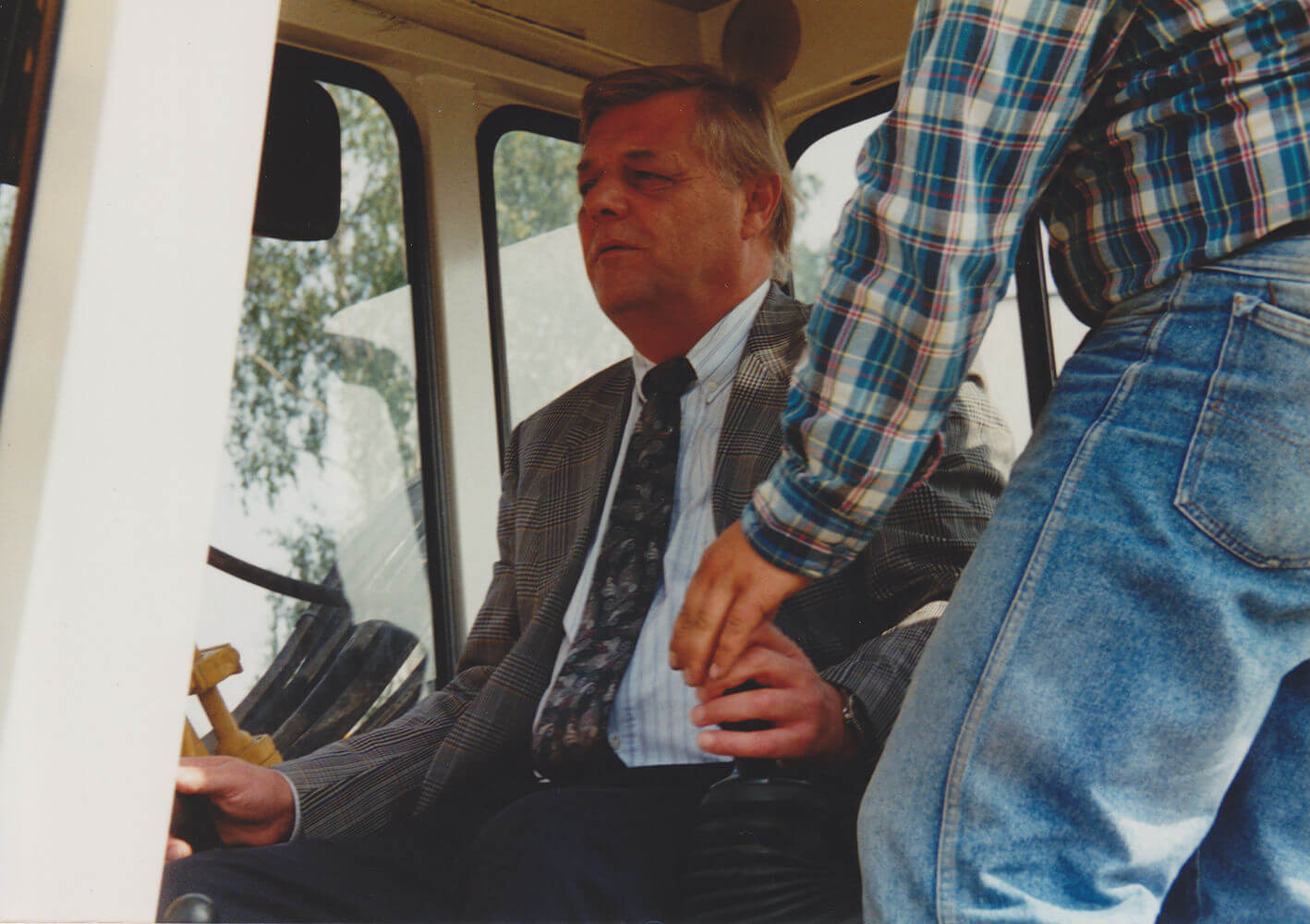 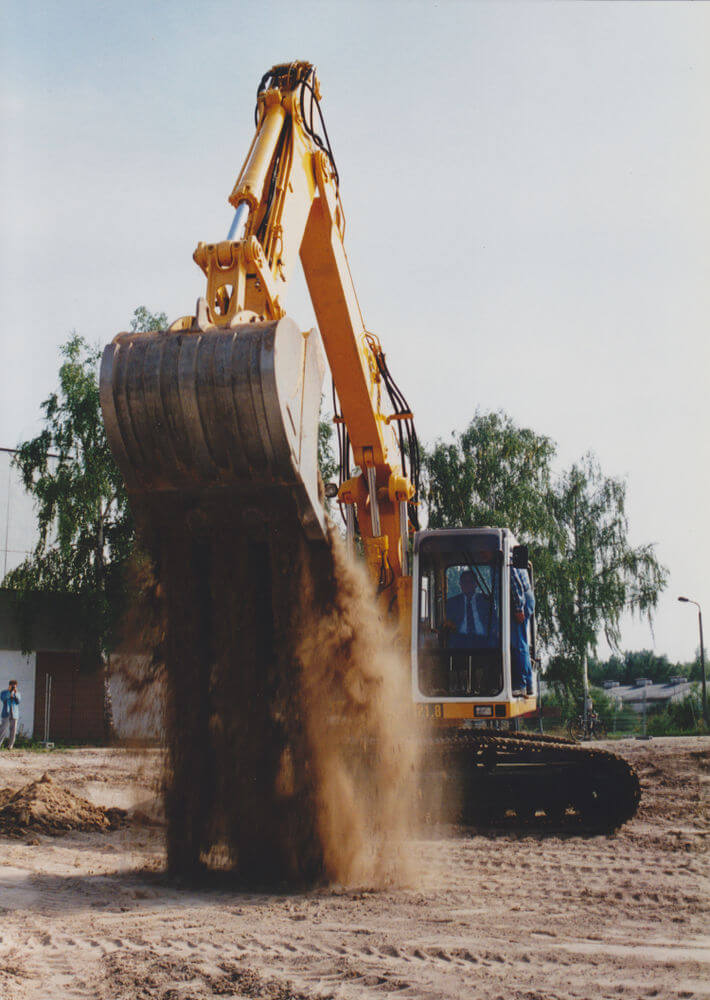 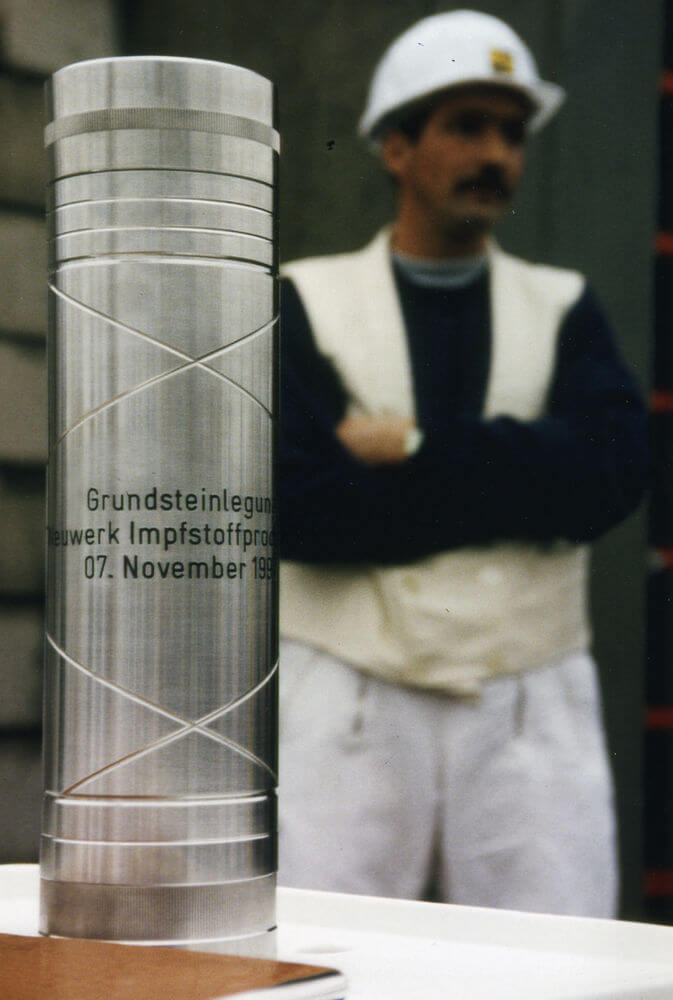 Focus on innovation, investment, and growth

One of the company’s success factors has been its consistent focus on innovative products and processes. Tried and trusted rabies vaccines initially provided a stable source of revenue, but new vaccines against diseases such as salmonella were also developed to diversify the company’s product range as management pushed ahead with sales across Germany and approvals for new drugs. The company had already successfully completed 35 approval procedures in 1998.

1997 saw the opening of a new vaccine production facility – the company’s first major investment at more than DM 51M. Turnover had already grown from just under DM 30M to more than 40M by this time with the company diversifying further into products such as active ingredients in cancer drugs alongside vaccines. More investment followed, including a building refurbishment project and freeze-drying system installation.

Dr. Hofmann and his management team followed a two-pronged strategy: The company’s staple activity with continued development and manufacture of veterinarian vaccines on the one hand, and contract development and manufacture of human vaccines playing an increasingly important role on the other. The company also engaged in further internationalization, especially towards the US. This involved, among other things, realigning every procedure to US standards.

This resulted in a palpable boost of some twenty percent in turnover to around € 54M in 2001 and a rise in the number of employees from under 200 in the year of privatization to 558 in 2007. This successful year also saw the Dessau-Tornau vaccine facility signalize its global orientation in a new company name – IDT Biologika GmbH.

More than a quarter of the company’s turnover was generated abroad in 2009 with staff numbers now exceeding 770. A global player and hidden champion had emerged on the outskirts of Dessau – a reliable supplier to the industry and an important local employer also supported by the state government of Saxony-Anhalt. IDT Biologika acquired a share in Riemser Pharma GmbH in 2013, indirectly continuing on its own timeline – Prof. Hubert Möhlmann, later Director of the then state-run VEB Serumwerk Dessau, began his scientific career on the Baltic island of Riems that gave the company its name; Riemser Pharma GmbH was also part of the East German Dessau-Tornau veterinary vaccine combine until shortly after the fall of the Berlin Wall.

The following years saw continuous expansion with IDT acquiring the contract manufacturing operations of Aeras TB, headquartered in Rockville, Maryland, in 2015. A key contractor to the Bill & Melinda Gates Foundation, Aeras TB focused on clinical phase 1 and 2 products. The acquisition represented a logical expansion of IDT Biologika’s vaccine capacities, but also meant that IDT now had a subsidiary in one of the world’s leading countries in the healthcare industry. At the end of 2018, Dr. Jürgen Betzing took over the management of the contract manufacturing business unit.

However, the increasingly global orientation at IDT and heavy expansion in its two business areas of contract manufacturing and veterinary medicine inevitably led to an increase in complexity. The contract development and production business for human products was also developing so rapidly that its turnover share had already passed the two-thirds mark by 2018.

This prompted the parent company and management at IDT to focus entirely on biotechnologically manufactured human vaccines and pharmaceuticals in the future with the aim of achieving a leading global position in this growth market; French veterinary specialist CEVA Santé Animale took over the veterinary pharmaceutical range and associated R&D activities in July 2019 with Dr. Jürgen Betzing taking the helm as CEO of the company, a position he has held ever since.

The strategic reorientation especially paid off in the COVID pandemic with IDT Biologika becoming a partner of choice supplying flexible and reliable solutions, even under challenging conditions, to leading global pharmaceutical manufacturers.

Well-equipped for the future

This excellent reputation rests on highly qualified employees on the one hand, and the company’s technological skills on the other. IDT Biologika has every reason to expect a bright future with these solid foundations in addition to further investment and support in the long-term strategy of the parent company, Klocke.